What if you could go unnoticed and unseen in the masses? Have the ability to lurk amongst your fellow man invisible to their detection.

It would give you a sense of confidence knowing you can’t be the target when they don’t notice you in order to target you in the first place.

That’s what we’re going to cover in this post. In this guide, we’re covering the Gray Man Theory. It’s one of the most effective urban survival skills you could learn.

The name in and of itself sparks mystique and intrigue. When you hear it for the first few times, you instantly find yourself asking, “What is a Gray Man?”

First things first. Before defining it, let’s spell it correctly. The spelling is with an “A”. Not an “E” in “Gray Man”.

As for the definition, according to Urban Dictionary, a Gray Man is someone who dresses and acts in a way that makes them nearly undetectable to those around him.

This label also isn’t just tossed around casually amongst hardcore tactical preppers, a “Gray Man” is used by the military. It’s a standard military term used to describe the act of “blending in”.

Essentially, it means existing amongst others without being noticed. Naturally, this would be an essential survival skill for armed forces.

How to Become A Gray Man

The idea is to not stand out at all. If you feel awkward and out of place. You will express that with your face, your body, everything. People will pick up on those signs instantly.

We are very good at reading micro-expressions instantly. Which is one of the reasons why first impressions count? It’s important to remain cool calm and collected at all times.

Watch this video of the 3 rules to becoming a Gray Man. 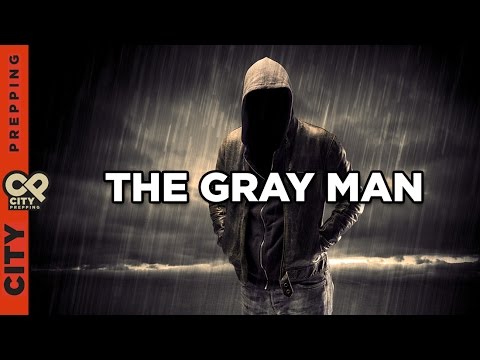 How To Blend in With The Crowd

To blend in, you need to look similar to the crowd that you’re in. The more you look like everyone else, the better a job you’ll do at going gray. If everyone is wearing blue and you’re wearing a red sweater.

It might not work so well. In general, darker colors work better than other colors. That’s why you see a lot of blacks and grey colors with military and law enforcement. Essentially you want to act like the most harmless creature on the planet. When in reality you’re a trained and skilled operative.

The objective is to go unnoticed and be forgettable. We must learn about how human attention and how the human eye works. Once we understand this, we can use it to our advantage to blend in and go unseen, which is the goal.

Of course, people can notice you with more than just their eyes. We have five senses:

But For the most part, when you get attention from people or become a target of a potential threat. It will be with their eyesight.

Importance of Blending In

When you blend in, you avoid many potential threats and dangers. This is the idea. It’s a survival skill.

If you develop the art of concealment and being invisible, then your you’re not a prospect for theft or kidnapping. This is especially important when traveling overseas as you would imagine.

Gray man skills are mandatory to develop if you’re a frequent traveler in other countries.

The reality is, kidnapping occurs frequently. The less you stand out. The less you reveal. The more of a chance you’ll be ignored because you won’t even be noticed to a possible threat.

In terms of gray man skills, situational awareness skills are essential and should be the number one urban survival skill to develop.

Keeping a low profile is the plan. The way to do that is to master situational awareness. You want to get good at quickly seeing what everyone around you is doing, wearing, how they’re acting. Everything. Then what? Then you do what they do?

If you do what everyone else is doing. Then you’re not standing out. You’re blending in.

If everyone is dancing. You’d stand out if you were not dancing.

But to be even more technical. You’re better off dancing like everyone else, but dancing just a little slower than everyone else. You’re blending in, but you’re also reducing the chance for exposure even more by not opening yourself up to doing something that would bring attention to yourself.

Is your boss around the corner while you’re talking about him with a co-worker?

Are people around you hearing you talk about personal details that could give away your location later? Look around you and take note of who’s around you. It’s easy to start rambling and give out one too many details about yourself that could be used against you later on.

When talking to others, go easy on the survival stories about being trapped in the wilderness for 30 days and 30 nights.

Low profile, remember. If you’re speaking to someone, the goal is to let them know that you’re not a threat and to be forgotten. You want them to instantly forget about you the moment you’ve left their sight. If you’re talking about exciting stories or anything interesting at all. They may not forget you for some time.

Don’t be exciting, fun, or specific about anything. If you have to answer a question or two about yourself, best to be as vague as possible without completely ignoring their question. That could make them irritated or angry. Neutrality is your mission.

Let out your introverted side. It would serve you well in being a gray man or gray woman.

The technology doesn’t exist yet to allow us to be completely invisible to the human eye. But with the gray man tactics and methods, we can come close. Using these tactics are one of the best safety skills you could have for yourself.

Learning these skills enable you to avoid becoming a potential target for violence and kidnappings as much as you could. It makes it more than worth it.

We hope this article helped you learn how to hide in plain sight by learning the Gray man theory. If you like this topic, check out the Gray Man book that’s listed in the Survival Library with more of the best survival books. It covers an in-depth guide on the art of invisibility.

You may also want to see our guide on how to sharpen a knife with a whetstone.