RELATED: How To Survive Any Wild Animal Attack

Have you ever encountered a mountain lion in the wild?

If not, then you’re in good company. Mountain lions are a rare sight for people to see.

We’ll get to that later…

There are many interesting facts about these animals you may want to know in case you ever find yourself starring one down while hunting, hiking, backpacking, or camping.

They aren’t seen in the wild very often, but if you do encounter one. You may want to know a thing or two about them in general.

For decades, ever since the beginning of 1879, Mountain Lions were first killed for bounties. A bounty was paid for every single lion kill.

These animals were persecuted as vermin by the European settlers.

Mountain Lions are the 4th largest of the big cats.

You can identify a Mountain Lion by,

Fact #3: Mountain Lions were given the title: “The Ultimate Loner”

As said above, these animals avoid human contact. So it’s rare for you to ever encounter one even if you’re around their territory.

Your chances of getting hit by lightning are higher than getting attacked by a mountain lion. Solitary and avoid humans.

Cougars are carnivores. They require 8 to 10 pounds a day in meat for their daily caloric intake.

Okay we admit, we made up this title for them. Not in a negative way, but in a badass Gray Man kind of way.

These lions silently stalk and ambush their prey when they have the opportunity to pounce. They can be seen at any time, but are most active at dusk and dawn.

A physical adaptation allows them to see at night. Making them the phenomenal ambush hunters.

Fact #6: Mountain Lions, Pumas, and Cougars are all the same species

The scientific name for a mountain lion is a Puma Concolor.

Fact #7: Just one sub-species is listed as endangered in the U.S.

There are an estimated 30,000 mountain lions in the western United States. But one mountain lion subspecies is critically endangered. The Florida Panther. Its population is less than 100.

Fact #8: The Need For Speed

The Puma Concolor can reach sprint speeds to up to 50 mph! Also known as ridiculous speed for a land animal.

They’re phenomenal sprinters, but not so much at endurance.

Lions can jump 40 feet while running and leap 15 feet up into a tree.

Lions typically live 8 to 10 years. Their tracks measure roughly 3″. They have a bi-lobed main pad with four teardrop shaped toes.

Fact #9: Legal To Hunt… if you can catch them

Lions were classified as a game animal in Montana in 1971. Lions can be hunted from September to April.

Fact #10: They Enjoy Being Stabbed They primarily prey on elk and deer and prefer wild game over domestic animals.

But they will also prey on other animals, including the porcupine. Maybe they like being tortured. 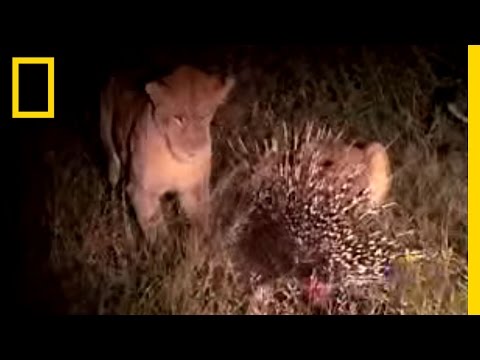 Adults mark the border of their territory by leaving scents along their territorial boundaries. They leave their scents in “Scrapes”. Scrapes are a four to a six-inch mound of dirt, litter, and urine.

Females breed at two years after they establish their territory.

Babies usually have spots for one year. The babies are called kittens or cubs. They are born with spots that usually last about a year. They also have blue eyes. They develop a tawny color as an adult.

Gestation for Mountain Lions is 92 days and they give birth about every 2 years. Mountain Lion litters consist of 2-4 cubs. They tend to be born in the warmer months of the year.

There are an estimated 30,000 Mountain Lions that live in the mountains (pun intended) of the Western U.S.

They are native to the state of Oregon. The state is the home to more than 5,500 cougars. Montana also has a prominent number of cougars, an estimated 5,330 in population.

Fact #14: Mountain Lions can live in any ecosystem in the U.S

We got the Lions beat for different ecosystems we can live in, but the lions are impressive.

They can live in many different ecosystems, including:

In conclusion, mountain lions are magnificently large cats that I hope you never run into on a trail run in Montana.

These were just a few of the remarkable facts about mountain lions. There are dozens more for you to explore if they are of interest to you.

How many of these facts did you know about Mountain Lions? Do you know any other interesting facts about them that everyone should know? Let us know.